Dzogchen Meditation Center is a small, independent meditation center founded by direct students of Vidyadhara Chogyam Trungpa Rinpoche.
We engage the authentic meditation practices and view of the Maha Ati and Mahamudra schools of Tibetan and Indian Buddhism.   We also engage the Shambhala teachings of Trungpa Rinpoche which is a secular path.   We do not offer retreats based on "Shambhala Buddhism."

Trungpa Rinpoche's lineage is known as the "Practice Lineage."  This refers to the fact that we resolve the view not through intellectual study but through the actual practice of meditation.  If you look at our retreat calendar you will notice that we offer a lot of practice retreats including two month-long dathuns per year.

There has been a shift away from intensive shamatha-vipashyana in the centers associated with Trungpa Rinpoche's mandala since his parinirvana in 1987.  This has a lot to do with the fact that shamatha/vipashyana retreats are not big money making retreats.  They are not particularly sexy.  In the mid 1980's when Trungpa Rinpoche was still alive Karme Choling, the main center in that mandala, offered 4 month long shamatha-vipashyana retreats each year.  Rocky Mountain Dharma Center ,the other main land center in Colorado ,was the site of the three month seminary which was held each summer.  There are no Dathuns scheduled at any Shambhala Center in the United States and three month seminaries no longer take place.  This is a clear indication of a deteriorating emphasis on the type of rigorous practice upon which the strength of our lineage depends.  One cannot properly enter this lineage without intensive retreat practice.

At Dzogchen Meditation Center we have no mortgages and no debts.  We do not need to make a profit on our retreats therefore we offer them at a basic price to simply cover our costs.  And our teachers do not recieve any compensation other than the opportunity to practice. Dathuns are offered at $40.00 per day.

This gives us the freedom to continue offering the intensive practice retreats which are essential to properly enter Trungpa Rinpoche's authentic lineage.

"There are many meditators but few who know how to meditate."  Padmasambhava

The Shambhala Teachings are secular in the sense that they are not culturally or religiously biased.  They are based on the fundamental truth of non reference point experience as the basis of wisdom inherent in our human experience.  This self-existing wisdom is expressed in the culture, art and spirituality of every human society.  As a Shambhala practitioner we can find this expression of what Trungpa Rinpoche calls "basic goodness" in many forms.  During Rinpoche's life he explored Japanese spirituality and culture along with celtic traditions.  We should not suppose that we have to adopt these forms wholesale.  In other words, when we engage these forms it is from the view of the Shambhala teachings on the Great Eastern Sun and basic goodness.  It is the same with the Dzogchen teachings.  Just because we live in America and shop at Walmart -- we don't abandon the view of Dzogchen.

Likewise, if we are practicing Kyudo or Zen Archery, we understand that practice from the view of basic goodness.  A "sensei" in the contemplative arts of Japan should not be confused with a guru or lama.  This lesson is similar to the story of Marpa.  When Naropa asked him whether he would bow down to the yidam or to the guru -- Marpa bowed to the yidam.  He mistook the expression or form for the essence.  It is the same with any of the Shambhala arts.  They express the wisdom of our lineage; the wisdom of Trungpa Rinpoche's mind which is inseparable from our own.  We don't adopt a theistic view or a limited view of practice when we engage other forms.   The same is true with other meditation traditions.  Shambhala is not a meditation super store where we get to pick and choose some practice that suits our neurosis-- Qi gong, Mindfulness Based Stress Reduction, Vipassana, Patanjali's sutras, Hot Yoga,  the teachings of Carlos Castenada's Don Juan.

When we walk into a beautiful Christian cathedral and feel that spiritual power we don't suddenly believe in God and Jesus Christ as the savior-- but we understand the essence of the Christian spiritual path.  The same is true for any spiritual tradition.   We can feel its uplifting power because of our practice.  In many ways, we become good Christians, good Muslims or Jews because we practice shamatha-vipashyana.   We become good citizens.   We can appreciate the heart of spirituality because of our practice.

Our primary practice is Shamatha-Vipashyana.  And we follow Trungpa Rinpoche's oral instructions on that practice known as "Touch and Go."  Without understanding that as the basis of the view any exploration of other arts and cultures from the Shambhala perspective will become confused and will miss the fundamental point.  This is the same idea as "Dzogchen View Three Yana Journey" which is Trungpa Rinpoche's fundamental approach to the buddhist path. 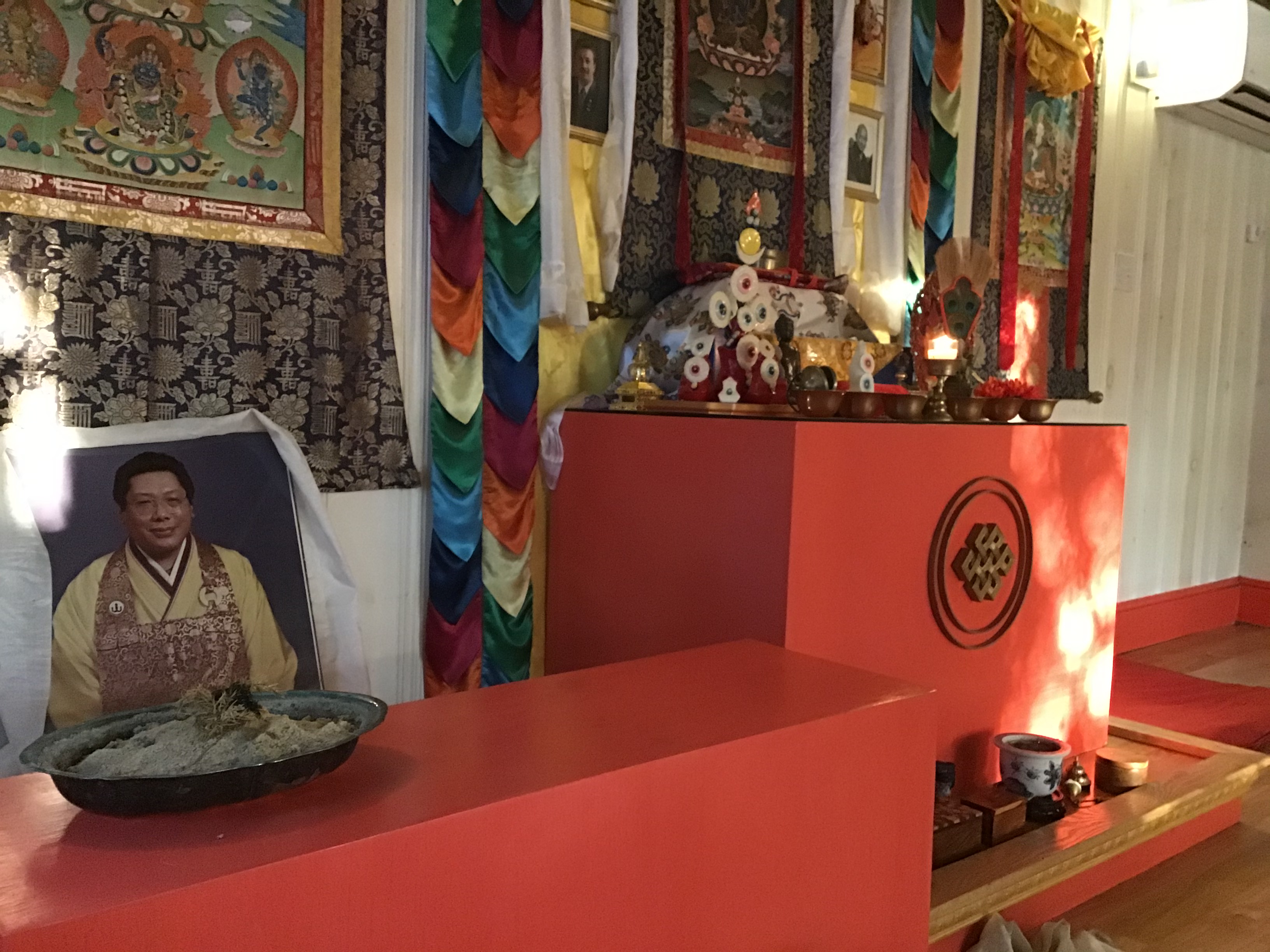 Dzogchen Meditation Center is not open to the general public.  It is a retreat center for members of the Surmang Kagyu Order.   To enter into training at DMC all applicants, whether they have previous training or not, must first successfully complete a weekend program called "Touch and Go" which is an introduction to Trungpa Rinpoche's teachings on meditation practice.  These are held regularly throughout the year.  Continued training at DMC is dependant on the students interest in entering the Surmang Kagyu Order.  We are not a public Dharma Center.
For further information please call Tashi Armstrong at (207) 442-9299 or (207) 607-3392.
"Before I got here, over at my house, we discussed the corruption that is taking place around the buddhist world.  And we concluded that the most critical one was that even Tibetans do not sit.  Even the highest people who are reputed to be good sources of inspiration do not sit.  Supposing communist China had not invaded Tibet-- quite possibly we would then have no way of presenting the real buddhadharma in this country.  Buddhism would be dead, having perished in its own graveyard.  So from that point of view, we have a lot of responsibility to practice the real buddhadharma as the Buddha taught it and as the lineage has described it-- that without the sitting practice of meditation, nothing can happen.
So the sitting practice of meditation is very basic and very simple.  I do not want to indulge you people at this point by giving you a whole discourse on how to meditate, how to do the whole thing.  I think you know that already.  And if you don't, too bad.  You should know more.  And if you want to know more, sit more....
And sitting is very dull.  It does not say very much.  There are no encounter groups taking place.  Nothing of that nature is happening at all.  It is very ordinary and very simple.  And because of that it is so highly precious.  Precious.  It seems to be the best idea that mankind ever came up with.  And the first person that came up with that idea was Buddha himself.  We feel very grateful to him that he came up with such an idea--it is a fantastic thought.  Not only was he enlightened, but he was more than enlightened.  He was an enlightened practical person.  He knew how to handle us--even in the 20th century.  So his logic never dies.  It is an important thing.  I have nothing more to say than that at this point."
Trungpa Rinpoche 1975 Seminary 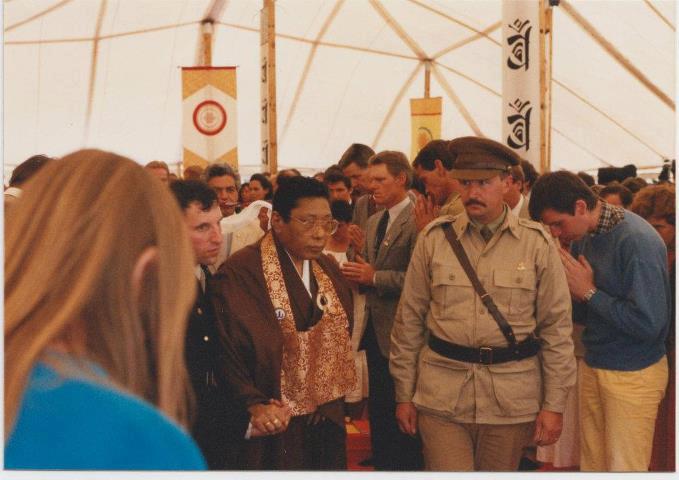